Best sub I’ve owned hands down. I would recommend this to anyone and everyone 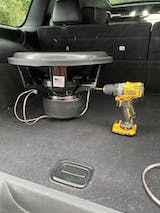 Arrived with a pretty dinged corner, but I had planned on modifying it anyhow. Rock solid box that specs out about like described. And unlike another review here, it came with 10ga leads soldered to the terminal cup, although I went bigger on my setup. Added a couple braces inside and some cld, and added a 3/4" baffle to double up the front and dropped an fi audio q18 in it for a temp setup on 2400 watts. Gotta say I'm surprisingly impressed with this box for a prefab. Little small for a solid 18, but still has incredible output, clean sound, no flex, and plays really nice and low. Carpet is really nice, but the contact cement holding it in certain areas is a little lacking. All in all, for $110 on black friday, this is an awesome enclosure if u want a quick decent solution to custom building!

I took a offer once received not checked ports so may need to be safe ad some liquid nails as when I build them use that and brass screws on US MDF, but the design cleaner and looks professional accept where hang my dogs toy over dented corner but box heavy 3/4 guess Chinese MDF other hand US be more heavy, but for what you pay and get it is what it is and at that worth it, clean. Ports and bracing not sure why not more poly in box where port not affected bare wood just might make it maybe helps already to fool sub if needed more space. I tried Fi 18 and SKAR EVL 18 - the box worked. Just wish they had VXF 18", one above it, not for me. SKAR was easy to work with on issues, concerns and or problems. 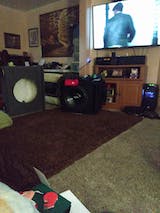 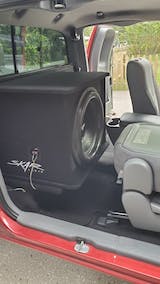 Who needs trunk space? Fits perfect in my 99 Honda CRV. Im probably going to mount handles and feet on this enclosure so I can throw it in my living room home theater for when it isnt used in my car. This enclosure is WELL built. Hefty. and fits perfect in my application. So happy I went with Skar. I will be using Skar for all my upcoming builds.

Thanks SKAR for putting out great products at great prices!