I’m using it for two zvxv2 12’s ik it isn’t rated for them but sure do sound good only if I could get a sponsor and get the amp to push them😂 being only 16 and all!! 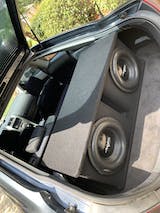 Good quality covering on the outside, nice looking box. However what little internal bracing isn't a tight fit, gaps on each end and lack of glue. Be ready to replace the wires on the terminal cups with 8 gauge, came with 16 gauge.

R
R.
Must do a better job with shipping!

This review deals only with initial inspection of the box, received today. Having read several reviews before purchasing, I was concerned with shipments arriving damaged. Well, this morning I was in the garage and heard a large truck stop at my house. Expecting the box today, I was surprised to head a crashing sound coming from the truck. Immediately opened the garage door and yelled to the driver, "be careful, that's woodwork!" At that moment, he appeared at the truck door and looked at me with a startled expression. I hustled over, grabbed the box before he could place on the ground. He asked, "you got it?" (I'm 63, in good shape). I answered, yes, I got it. Sure enough, there was a torn-away area in the SINGLE layer cardboard box.

He left, I carried the box to the garage, called my wife and took 2 videos as I opened the box. The area in the front bottom of the face (of course) is slightly depressed, and while this cosmetic damage won't effect the functionality of the box, it was entirely avoidable had the Fed-Ex driver given a s**t.

Moral of the story is Skar needs to at least double-box these shipments. I get it that we live in a "FREE SHIPPING" world, (thank you AMAZON) that this double-boxing is extra work and cost, but damaged delivered goods is not an option. I'm keeping the box, later will append this review with an actual star rating. Not posting a phot, because I don't think the damage will be easily visible, definitely not peeling away glued carpet to take a photo and causing another problem.

The box is well built sounds amazing and I would highly recommend it. The delivery person cracked the corner but otherwise this box is perfect.