So I wanted to add some bass to my Foxbody hatchback mustang and the kit with the 12” EVL sub and 1500 monoblock amp did the job a lot more than I need but damn this sub hits only up 1/2 way and I can’t even stand all the bass. I guess I’m getting old. LoL 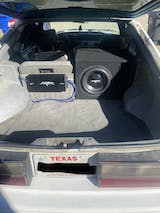 I can talk a lot so I will try to keep this short and sweet. All the equipment you see below is installed in my car and I purchased it all for 500 Canadian dollars. The seller had no clue on specs such as the maximum output of the amplifier, what model speakers they were, resistance or wattage handling, and gave me wiring that was aluminum and was already falling apart and turning to dust. Anyway once I heard of the skar subwoofers I began to grow nervous but something told me this is the buy of a lifetime as the seller let me hear it in his car and he said turn it up as loud as you want so I went on to Spotify and put on the track by Lil Wayne called A Milli and it shook his whole apartment complex and was flexing the sunroof on top of his new Audi 2021 gloss black with not a scratch on it and it displayed the Audi logo on the ground when you would open the doors but long story short I knew kicker was a good name it is in my opinion anyway, and it was loud enough for people to come out and look and I had the volume may be at 1/4 or so I thought, next thing it starts raining so we cut wires and loaded up then left. I decide to buy it and see what you get. It was installed by Atlantic Car Stereo here and Dartmouth Nova Scotia Canada & they convinced me to buy some good wiring which I totally understand and I'm glad I did now because I was going to go cheap but after the explanation of all the reasons why you shouldn't go cheap I bought Stinger wire and it was premium 0% oxygen in the copper wiring and there are no other metals mixed with in. The coating on the wire or outer covering is flexible but also extremely durable and me and my wife sat at the car stereo shop for about 5 hours waiting for them to install everything and both of us were staring at the ground in the waiting room and all of a sudden we heard a loud bass related rhythm That Shook the whole store and played for about 20 seconds and I knew it had to be ours and the bass coming from the dual 12 in D3 model 1250 RMS or 2500 Peak power blew me away because I knew the amplifier was powerful but I did not know anything about the brand skar but now I know. They are not to be messed with. The subwoofers have already gotten the police after me because a block away I was playing it while my wife was working and an officer decided to come over and tell me to turn it down and since we live in such a small town they deemed it a residential area and said that one complaint and they will be back to place a fine and take me thru court. I acted serious and all but was laughing my ass off on the inside. Either way their Detachment was a block away and it was in a brick building so I found it hard to believe but I did believe it because it was pounding where I was standing hahaha. Anyway if you're doubting the brand skar don't because they are well worth the money, at least the high-end ones are. I didn't find out till today the brand I had and model and specs but I removed one subwoofer from the box and was pleasantly surprised I had the D3 model two 12in and they we're very heavy!!!! I almost could not get them back in on my own. 5 out of 5 stars for this product and you will not be disappointed. The only skarring will be the brand name logo, your hands from install, and your ears From the bass. Next step, 4cu box. 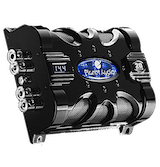 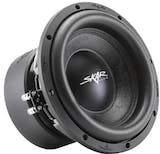 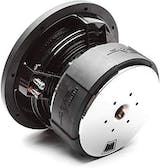 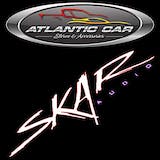 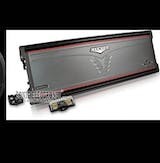 I run a 4 12 inch subwoofer build box is a 12 inch areoport 10 cubes and tuned at 29hz I started with Power Acustic Gothics, Then Rockville k9s, and finally Skar EVLs and they blow the others I've owned out of the water. I did my research and as someone who has been in car audio since 1992 and has close friends that own some of the big companies within car audio I like to think I know my stuff. I am running a Rockville dbcomp5 to the 4 12s at final load of 1ohm and have been pushing them hard for over a yr now and not one single issue :) It sounds great have it hook up the rp1500 just what I was looking for I drive an Acura MDX and I didn’t wanted to waste a lot of space on 2 12’s but I wanted some bass at the same time. It was hard choosing this sub and the audio pipe txx-bdc4 but I think I make a good choice some friends think I’m ruanning 2 12’s lol it gets down! 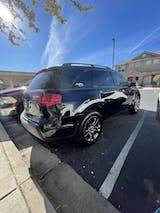 Best sub I’ve had so far in my car system hit hard I have it on 3,000 watts and its handling it very good and have it inverted and in my opinion is hit harder the have it regular👍🏻 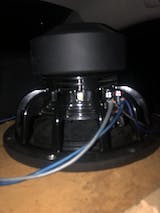