These are insanely powerful for their size. I built a custom ported box tuned to 36 hz for a friend of mine so he can have these in his single cab behind the seat and man do they pound. 1200 W RMS for these bad boys sound beautiful. This project was awesome, his truck got all the works. TX series components front and back, RP2000 @ 2 ohms, full OFC wiring kit 0 gauge, big 3 upgrade. He absolutely loves it. Thanks Skar 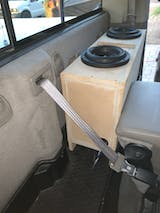 J
J.
Great, but has requirements.

The sub is great BUT anyone about to buy this sub and plans on buying the 8inch pre made box from skar to put it in, please rethink this, i had the SDR8 in the box so I already had it, I thought well I'll just put the EVL in the same one, should be fine right? No... its FAR to small and they are built for too high of a frequency to really take advantage of the sub. 40hz is just a baseline, they can sometimes be up to 41 or even 42hz, especially when you put such a large sub in the box. You want under 35hz to take full advantage of this sub, either skar really needs to consider building boxs that are 32hz to 35hz or just have one built or buy the box elsewhere. Not knocking the sub though, its great.

WoW, thats all I can say. I got to build a box for these bad boys. Then I will see. Very beefy Quality subs.

At first, I had super low expectations for this subwoofer. I’d never owned a Skar sub before but i took the chance because I decided to switch from my massive 15” sub to something smaller and more compact. After the installation, I did some demos with different songs and sweeps, and WOW was I impressed. This little sub packs a punch paired up with their SK1X8V enclosure. These guys at Skar do not mess around when it comes to the overall quality of their products & sound. I paired this up with their 800 watt amp and even a set of door speakers. Skar’s products are unmatched and for a hell of a price too. I’ve recommended Skar to all of my friends looking to upgrade their system. THIS SUB IS A GREAT CHOICE!