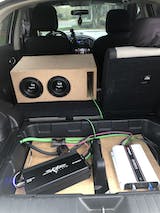 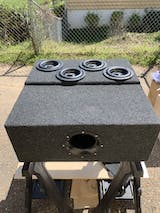 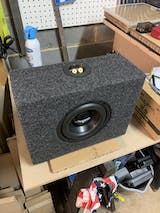 I bought 4,had two shallow mount box's 12s,I rebuilt boxes for them4 under back seat, they hit hard, bought 4 more,but amp can't hang

So I bought 4 of these EVL 6.5 subs from Skar through Amazon. I had read many reviews, watched videos on them and my cousin lives by Skar Audio stuff so out of pure curiosity I snatched these up. After sitting and looking at them for about a week, I finally came up with a design to try these little puppies out. So I went out and got a sheet of 3/4 Birch (only thing I use) to build my project. Decided to put two in a sealed divided enclosure. The other two I put in individual ported enclosures. "Picture Provided" I have a 2019 Jeep Renegade and I like to play around with different set-ups depending on mood lol call it a hobby :-P I have been a huge fan of kicker for many years and usually stay with them. but, my cousin kept telling me to give Skar a shot! Him and his buddies have a car audio club and a lot of them use Skar. I figured that many using them for comps there has to be something to it. So I wired these each up as 4ohm then bridged all to a 1500.1 amp at 2ohm, set amp at half gain thinking well may be to much amp for 4 little 6.5s at 200watt rms each. WRONG! these are power HUNGRY! and Holy Crap was I in for a surprise... They hit just "Almost" as good as my 12s wired at 2ohm. The combination of sealed and ported was sweet! but, was extremely impressed being 6.5s. In the end I told my cousin I know now why you all like Skar. So now with that said I have ordered 3 SVR 4ohm 8's for my next project which will be putting all three in a fourth order enclosure using 3/4" Birch and maybe even wiring to 1ohm. Humm time to consider installing a second battery YEEHAW! As I think if the 8's are anything like the 6.5s they will chew up a 1500.1, guess its time to try out Skar's Amps :-)

Exactly what I was looking for and needed 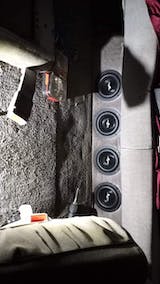