Haven't had a chance to hear it. Can't tell anyone if it beats. Have quite a bit more work to be done surrounding my car before a proper evaluation can be submitted. But you asked me anyway... 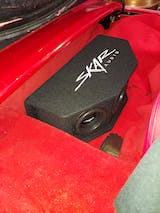 I have always had 2 12inch subs with 2400watt amps. But this build i wanted to go with a smaller set up. So I got this triple 8 loaded box and paired it with the SKAR RP1200.1D AMP AND IT POUNDS AS LOUD AND HARD IF NOT LOUDER AND HARDER than my 2 12 set ups. Wow am I very impressed

Skar made ordering this amp directly from their website an unnecessary pain in the @$$ claiming suspicion of card fraud; Amazon didn't have any issues with the same card.

The monoblock I ordered to power this sub was Chinese DOA, so I had to modify my system layout to use and hear the sub. I had to rewire the enclosure to 3 ohm and bridge 2 channels of my 4 channel amp with a much lower gain; I am still really impressed with the sound quality coming from this enclosure even under the nerfed setup I'm stuck with until my Skar monoblock arrives. I listen to mostly heavy metal and hard rock, so I went with 8"s to enjoy the better response to high bpm double kick drums, and these fit the bill fantastically. Larger subs like 10's or 12's can be pretty muddy but this thing provides a clear rumble for Slipknot, Slayer, and Tool and such. Surprisingly, they even excel at the low sustained tones of artists like Sublime, Eminem, Mackelmore, and Korn. This little beast provides every bit of bass that I need for the music I prefer, and then some. I can't wait to get it rewired and hooked up to a 1 ohm stable monoblock to really make it sing the way that it wants to.

The enclosure came packed in a very sturdy shipper with plywood reinforcement to protect the speakers; really a level of care that you don't see from many companies. The enclosure is also very well constructed and as solid as a fricking brick. I dropped one star because the carpet is peeling away from the enclosure along the top face joint. I don't live in a particularly hot or humid climate, so I was surprised by that separation, but it isn't terribly noticeable (yet) so it is just a minor cosmetic issue and not a deal breaker by any means.

Even with my undesirable temporary audio setup, if I wanted to, I can still make the neighborhood know when I'm around. If you know what you are doing, or even if you don't but you have good YouTube skills, this little guy will pound as good as any pair of 10's or 12's.

i replaced 2 12" JLw3v3 subs with these 3 8"s from skar to save some space in my trunk, and i am very impressed with them! i didnt expect them to hit as hard and clean as they do. for the money you'll spend, i dont think you will find a much better deal anywhere else. 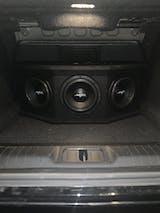 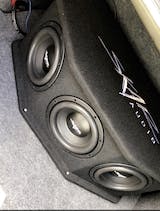