Have had them installed in my Yukon in a c-pillar wall for 6 months now. Running a SKV2-4500 and they got me to 149.2 on music on the glass. Still need to finish sealing off my wall and full wood roof. Had a lot of foam exposed when I metered it which I know hurt the score. Been playing them hard every day and they haven’t missed a beat. 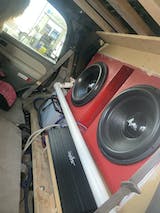 Summary: Highly recommend. Competitive pricing, very strong performance. Paired with the right amplifier, a strong source of power, and a well-tuned enclosure, you will be glad you bought Skar.
~~~~~
Story time: I had been delightfully pleased by my first Skar setup that included 2 SDR-12's fed by an RP-800.1D, which served as a positive first step into the "more-than-a-walmart-sub-thrown-in-the-trunk" build (which, for many of us, is where the passion for bass first began). So after putting in serious time and doing my homework, I planned how I was going to take this hobby to the next level.

A wall with 2 18's was the goal, and being able to move some air would be icing on the cake. So I drew sketches, watched videos, played with the numbers, played with the numbers again until I learned to love the math, compared the specs, and finally I made the plunge and purchased the equipment and materials to do the build. The Skar SKv2-4500.1D amplifier, paired with two of these 18's, installed in an enclosure whose design I spent meticulous hours refining, powered by the appropriate level of electrical -- all these elements looked good on paper, so I went to work.

The hardest part was building the enclosure, as I had zero woodworking experience and owned some rather basic tools along with whatever else lay around in the garage. BUT, don't let the lack of tools discourage you; take your time, work with what you have if you're living on a budget, and learn along the way. That being said, I worked slowly and finished building the box over the course of 2 months. The subwoofers jumped into their new home, the SKv2-4500.1D joined hands with the subs and power source, and... it didn't sound right...

I had listened to bass long enough that I could tell something was off. It sounded as though the subs were being under-powered, and doubts that came with my inexperience caused me to question things that were beyond my understanding: something wrong with the h/o alternator? the battery? the pcm voltage regulator? not enough power to the amp? was the amp a dud? So I ended up spending money on upgrades which appeared to yield no results.

...a year and a half later... after thinking I wasted so much with this build, my wife convinced me not to give up. So I found an educated, car audio business owner who brought me back to the basics. I pulled out the subwoofers and... "Oh..." I had the subs wired out of phase. Let me say, after fixing the wiring that day, it was as though the heavens opened and God said, "let there be music for the neighbourhood to hear." And thus, the neighbourhood heard music.

I've been enjoying the windshield-flexing, rear-view-mirror-disrupting, hair-trick-air-pushing, chest-rending bass ever since. Ahh, the long wait was not in vain, and I have learned much along the way. Now it's time to reap the rewards from my first experience in building an extreme car audio system.

PS: my wife is the real MVP.

Ive always bought skar audio for all my builds. Cost and performance effectiveness. I have two zvx 8s in my silverado a 12 in a trailblazer and now an 18 in my yukon denali. I built a 5.25 cu ft box ported tuned to 32 hz. This thing slaps on a taramp 3k. I also have a skar 2000.1d. Would buy again. 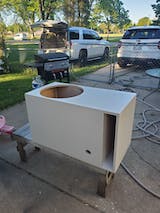 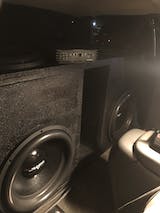